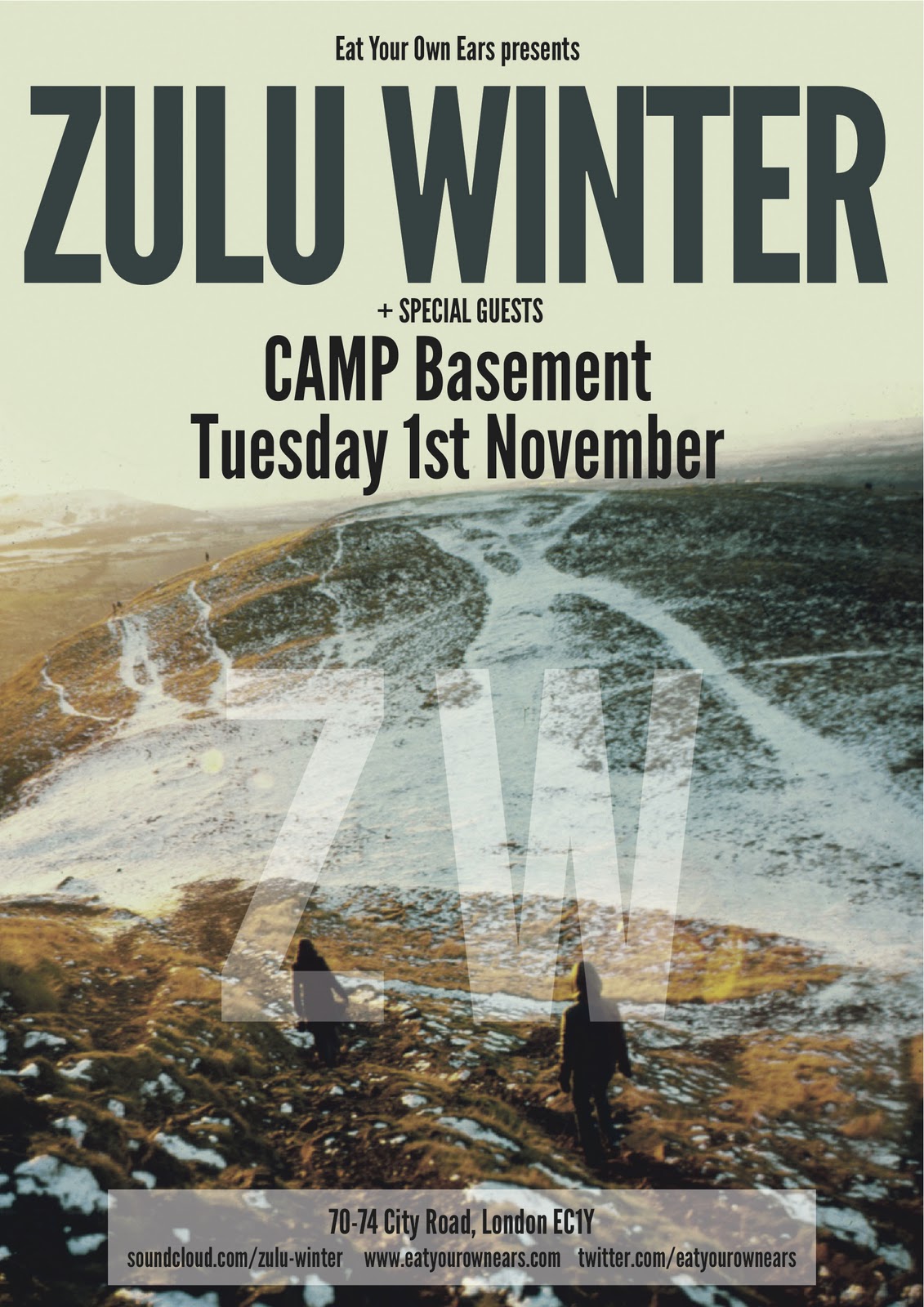 Let’s Move Back To Front :

Remember how once upon a time the Vaccines were obscure London up and comers with only a pocketful of tunes and a bucketload of Hype. Well, now that they’re gracing festival stages and becoming really rather big the music-world has decided another bunch of young “whippersnappers” are needed to fill their boots. Step up Zulu Winter who, despite not being entirely thrilled with this comparison, seem to have the youth, looks, buzz and above all else the tunes to live up to these kind of big predictions. They also have a blog which they’d really rather like you to check out, although they only mention this a few times (we’re no strangers to a bit of shameless self promotion here at SNN) :

Hey Zulu Winter, first things first what’s the story of the band how/when did you all get together?

We’ve all known each other since we were whippersnappers, schooling together, getting bored together and forming a band together for all the normal reasons. We’ve played in various guises for quite a long time and you could say we’ve taught each other to play. There’s a lot of different styles and musical backgrounds within the group which means that we have had an unavoidable influence on each other for better or worse!

This is where I would love to launch into an elaborate tale about a friend who got confused about the seasons in Africa and ended up on a trans-continental wild goose chase but that would be utter crap… We chucked a lot of band names around, some ok, some bad some awful and ended up at Zulu Winter. I was reading a book called On The Black Hill by Bruce Chatwin at the time and the Winter element came from that. Then it all started getting a bit depressing which is when Zulu popped very randomly into the equation. It was always important to us that the name didn’t signify too much so when this was put forward and no one could explain what it meant we knew we were onto a winner.

You’ve been compared to Wild Beasts a bit in the music press, flattered or is this not a sound you’ve been aiming for?

Strangely or not we haven’t aimed for a sound. There are elements of various musical styles we all like and individually we try to bring these to the group. It can be pretty tough trying to incorporate everyone’s often slightly odd ideas into what are essentially pop songs so we’ve worked hard at understanding where we are all coming from artistically. That basically means playing and recommending a lot of music to each other meaning you’re not too surprised when your synth player (Dom!) is trying to incorporate some strange idea he heard off some equally bizarre Czech new wave film. See blog…

R.e  Wild Beasts thingy, in some ways it is a compliment as they’re a great band with good ideas but I do feel it’s a slightly lazy comparison. Yes Will (Singer) does sometimes sing in falsetto but musically I don’t see many other comparisons. I feel we’re much more expansive and less restrained than Wild Beasts. Regardless, it’s a compliment in many ways because I hear they’re good people that work hard and have forged their own path…

Another tag that’s been stapled unceremoniously to you is ‘the new Vaccines’ , do you feel this expectation is a lot of pressure for you when you’re writing/performing or has the growing hype been alright?

One of the worrying things about the UK music industry is the amount of hype they put on bands so early and not giving a band any time to develop or to make mistakes. You get hyped and then the majority of time you get slated straight after. That’s how it works… It’s like a musical version of Heat magazine or something. It breeds a weird sense of paranoia between bands when starting out and trying to get somewhere, which doesn’t seem to happen so much in the states where I feel bands support and encourage each other more. Mini rant over… As I’ve said before we played together on and off for a number of years and largely we try to ignore the hype as much as possible and concentrate on making the record we want to make as good as possible. We put enough pressure on ourselves so paying too much attention to hype would be disastrous! A little is fine though, it makes that windowless rehearsal room you have been in for god knows how long a little more bearable.

Who are your biggest musical influences?

Everyone has very different musical tastes so I’m afraid I can’t really give you many. Somewhat predictably our Guy and Iain (drums and bass) listen to a lot more electronic / dance music than the rest of us. Will comes from a more folky and perhaps pop (the good stuff obviously) background which is essential for our melodies. Dom listens to a lot of soundtrack stuff; Carpenter, Morricone. Mood based stuff. He’s also a massive broadcast fan. I like my sleepy, drone type stuff and have recently started on a bit of a jazz bender. Been really enjoying Alice Coltrane and Pharaoh Sanders stuff… There’s also a record called Blanck Mass by Blanck Mass (Ben from Fuck Buttons) and that’s a lovely apocalyptic night-time musical treat.

We spend quite a lot of time in the studio talking about how parts interact and react with each other making sure that the music we’re playing achieves the mood we’re trying to convey… It might sound a little pretentious but when you have known and played with the same people for awhile you start to look for an influence and inspiration that is more abstract than trying to sound like the last record you liked!

You’ve recently moved from London to Cambridge, How far do you feel the city’s shaped the music you make and are there any local bands you think we should keep an ear out for?

Nope we’re still in London. Where did you get that nugget from? (Percy: Having googled this for an hour I’m no wiser although, as some sort of excuse, Childhood, who we also have an upcoming interview with, have just moved to Nottingham… still confused? Me too.) I was born in Cambridge though and lived there until I was about 6 when I moved to St. Albans. Given all this hype there may be some council funded drive to bring me back. I’ll check it out.

Some bands you should check out: Brew Ha Ha, Outfit, La Shark, Laurel Collective, Micachu, Mozart Parties, Echo Lake, Honrada, Loved Ones. We do a series on our blog called musical friends which you should check out. You’ll see some of those names already and expect to see the rest pop up soon.

Cheers for all your help, last of all what are your plans for the rest of 2011 and on into the new year?

The main thing is to finish the record. We’ve been recording and writing all this year and we’re pretty close to the finish now and hoping we can release in the first half of next year.

We’ve got a series of dates and a few festival things going on as well so be sure to check those out on the blog. Can I plug our blog some more?

Most importantly we have our debut single coming out on the excellent Double Denim label on 7th Nov and our first headline gig at CAMP basement on the 1st so working towards that. In fact if you are reading this and haven’t been incredibly irritated by the cut of my jib then I suggest you go buy yourself a 7” of the single and a ticket for the CAMP show. Even if you’re now tearing your hair out you should still come. I don’t talk on stage. Promise.

One thought on “Zulu Winter – Talk Origins, Hype and Why They’re Not the Next Wild Beasts”